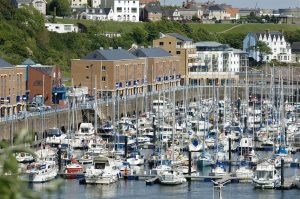 As part of the £115m plan for the newly branded Milford Waterfront, Milford Haven Port Authority (MHPA) have released a study looking at options for the redevelopment of the Grade II listed Quay Stores on Victoria Road in Milford Haven.

Arwain Sir Benfro – the Local Action Group (LAG) for Pembrokeshire, administered by PLANED provided funding of £10,700 to Milford Haven Port Authority. This is funded through the LEADER programme, which is part of the Welsh Government Rural Communities – Rural Development Programme 2014 – 2020, Funded by the European Agricultural Fund for Rural Development and the Welsh Government.

The study explores options that could attract major investment and provide a venue for use by the local community, as well as boosting local tourism.

Stella Hooper, Milford Haven Port Authority said: “We asked local people what they would like to see in Milford Waterfront. Suggestions included a multi-purpose auditorium space, with places to eat and drink.  This would help attract top entertainment acts to the County, as well as providing a space for both commercial and community use for a diverse range of events and activities.

“Our study also looks at environmental enhancements to maximise energy efficiency.  Milford Waterfront is a nominated low carbon area under the Welsh Government’s smart living programme.  We are working towards the introduction of a smart energy system for the whole of the Waterfront, including the Quay Stores site.  This will include connections to the Liddeston Ridge solar park, smart technology and an anaerobic digestion plant. The creation of a 400 seater auditorium, together with a food & drink outlet in an energy efficient building within a designated low carbon area will support sustainable tourism.”

The feasibility study for the Quay Stores site and the East-West link options study represent the first step towards the redevelopment of the site. It is a central location and has the potential of connecting the Waterfront with Charles Street on the upper level. A range of options were scoped in the study, including a funicular, a glass elevator and an escalator with stairway alongside. Once redeveloped, it is hoped the site will help build on the sense of community in the town.

The reports from the project are available here: