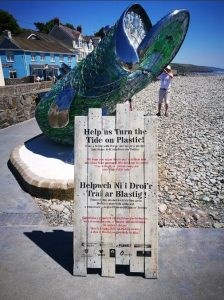 A project to raise awareness and change behaviours to reduce marine litter has been funded by Arwain Sir Benfro.

The project will raise awareness importance of keeping our seas clean and rich in biodiversity by creating an iconic steel sculpture of a sea bass filled with plastic litter on the Amroth sea front.

Arwain Sir Benfro – the Local Action Group (LAG) for Pembrokeshire, administered by PLANED provided funding of £11,000 to Amroth Community Council. This is funded through the LEADER programme, which is part of the Welsh Government Rural Communities – Rural Development Programme 2014 – 2020, Funded by the European Agricultural Fund for Rural Development and the Welsh Government.

The project will support the UN Clean Seas Campaign, and will coincide with the Visit Wales Year of the Sea 2018 and the Volvo Ocean Race being hosted in Wales. The Clean Seas pledge as part of the project focus on litter which has already ended up in the sea, and will also address land-based pollution which represents over 80% of the source of marine litter.

Bertie, standing 14 long and seven feet wide, will glow through solar power in the hours of darkness, will spend his first three months in Amroth, before moving on to Saundersfoot. He will then be available for any other coastal community in Pembrokeshire to put on display.